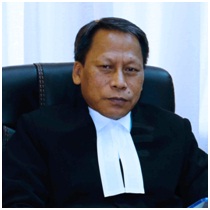 Hon'ble Mr. Justice. Shri Songkhupchung Serto
Born on 1st March, 1961 at Sagang Village, Churachandpur District, Manipur.
Completed graduation from St. Anthony's College, Shillong (NEHU) and obtained LL.B. Degree from Law Faculty, Delhi University.
Enrolled as an Advocate in 20.02.1986 and joined Manipur Judicial Service, Grade III on 16.05.1992 after practicing Law for more than 6 years at Bar.
Promoted to MJS Grade II on 10.12.1997.
Served at all the Districts of Manipur, except Chandel and Bishnupur. Deputed to Imphal Bench of the Gauhati High Court as Deputy Registrar (Judicial) on 29.09.2011.
Appointed as Registrar of the same Bench on 19.03.2012 after promotion to MJS Grade I.
Appointed as the first Registrar General of the High Court of Manipur on 25.07.2013 after the High Court of Manipur came into existence and when the post of Registrar General was sanctioned.
Elevated as Additional Judge of High Court of Manipur on 14th March, 2016.
Transferred to Gauhati High Court and took oath as Additional Judge, Gauhati High Court on 3rd October, 2016. 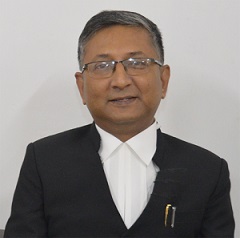 Hon'ble Mr. Justice. Shri Manish Choudhury
Born on 01.03.1972 to Late Kshitish Chandra Choudhury and Smt. Mira Choudhury, Justice Manish Choudhury passed the High School Leaving Certificate Examination, 1987 as a rank holder from Cotton Collegiate School, Guwahati. After passing the Higher Secondary (Science) Examination, 1989 from Cotton College, Guwahati with distinction, he joined Ramjas College, University of Delhi to pursue B.A. (Honours) in Economics. After completing graduation in the year 1992, he completed Masters in Economics in 1994 in 1st Class and obtained LL.B. Degree from J.B. Law College under the Gauhati University. He served as a Lecturer in Economics at Damdama College and North Gauhati College from October, 1995 to November, 1997. In November, 1997, he joined Unit Trust of India ISL at Kolkata where he served till August, 1999. After tendering resignation therefrom, he enrolled himself in the Bar Council of Assam, etc. on 27.08.1999. Practiced mainly in the Principal Seat as well as in the Aizawl Bench, Itanagar Bench and Kohima Bench of the Gauhati High Court. Also attended the Central Administrative Tribunal, the Courts of the District & Sessions Judge in the districts of Assam, the Court of Special Judge, Assam, the Court of Special Judge, CBI, Assam, the Assam Administrative Tribunal, the Assam Board of Revenue, etc. Was Standing Counsel of the Directorate of Land Records, Assam from 2009 to 2016 and Senior Standing Counsel, Higher Education Department, Assam during 2014 to 2016. Was retainer counsel of a number of organizations, companies and PSUs. Appointed Member, State Law Commission, Assam on 24.06.2015. As a Resource Person, he attended Training Programmes organized by Assam State Legal Services Authority all over Assam. On 06.04.2017, he was designated as Senior Advocate by the Gauhati High Court. Elevated as Additional Judge of the Gauhati High Court on 18.01.2019.
Download GHCKB Android App here..